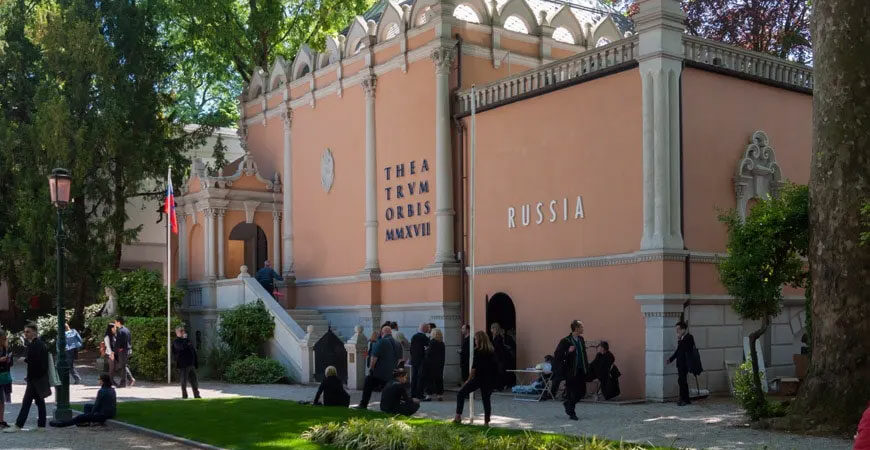 It has been reported that the Russian Pavilion at the world-renowned Venice Biennale has uncomfortably close ties to President Putin. The women behind Smart Art, the company contracted to produce the pavilion for the next 10 years, are close to the President’s inner circle: Anastasia Karneeva, the pavilion’s commissioner, is the daughter of a prominent associate of Putin whose company produces wartime fighter jets, while Ekaterina Vinokurova is the daughter of none other than Russia’s foreign minister, Sergey Lavrov.

However, the impressive Russian Pavilion in the Giardini will now remain closed for the 2022 edition of this prestigious world art event as the artists and curator responsible for the exhibition resigned following the Russian Federation’s offensive into Ukraine.

Artists Alexandra Sukhareva and Kirill Savchenkov, as well as the pavilion’s curator, Raimundas Malašauskas, each announced their immediate resignation from the pavilion on social media on Sunday, February 27th.

“This war is politically and emotionally unbearable,” wrote curator Malašauskas, a Lithuanian who was born in the Soviet Union.

The Italian organization acknowledged the decision in a statement to the press: “La Biennale expresses its complete solidarity for this noble act of courage and stands beside the motivations that have led to this decision, which dramatically epitomizes the tragedy that has beset the entire population of Ukraine”.