A newly discovered portrait by acclaimed South African artist, Irma Stern, was on display last month at a specially curated exhibition presented by the London auction house. The collection of paintings, photographs, drawings and sculpture from across the African continent also featured highlights by some of the masters of African Modernism, including Ben Enwonwu, Yusuf Grillo, Iba N’Diaye, Skunder Boghossian, Akinola Lasekan and Mohamed Melehi. 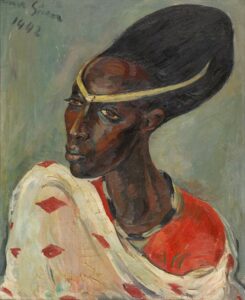 It was one of the few works the artist sold whilst working in the Congo which then found its way to a Belgian private collection while the majority of her Congolese paintings returned with the artist to South Africa, where they have been exhibited to great acclaim and continue to fetch amongst the highest prices at auctions in Johannesburg and Cape Town. At the recent Sotheby’s London auction this work was sold for £438 500, more than double its highest estimate.